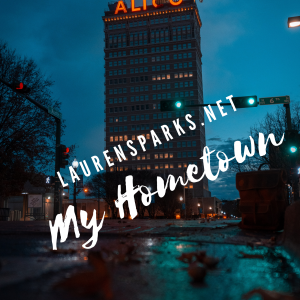 You may have seen on this blog a time or two that I watched the mini series Little Fires Everywhere.  I remain fascinated by it.  Brene Brown, a sociologist whose research I also find fascinating, recorded two podcasts about the show and the novel it was based on.  I downloaded and listened to them right away.

In one episode, Brown interviewed the book’s author.  The second featured Reese Witherspoon and Kerry Washington, the lead actors in the Hulu series.  During both, the insightful host introduced an interesting concept – your hometown as a character in your story.  The author set the book in her own hometown, Shaker Heights, Ohio.  This picturesque hamlet is one of the first planned communities in the United States.  Designers thought themselves very progressive by voluntarily integrating before most of the rest of the country.  At that time, racial unrest and violence had already occured.  This dark past was pushed under a rug as financing became available for black residents to move into white neighborhoods and vice versa.  Buses carried white students to black schools and black students to white schools. 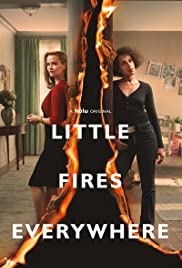 The self-satisfied occupants of Shaker Heights claimed to be color blind and ignored differences and previous history in favor of looking the part of an equality based utopia.  Because of this, the Shaker Heights community still struggles with the same issues of race and class we see in the rest of the nation.  It strives to maintain the picturesque facade with rules.   The lawns can be only 2 inches, and house paint color is regulated.  In the movie, Mia’s rent house displays the importance of appearance.   The duplex, from the outside, looks like a single family residence.  But physically and metaphorically, slapping a coat of paint on something without fixing the foundation makes for a problematic existence.

I realize that my family of origin, other people I surrounded myself with and many other factors helped mold my morals, beliefs and overall worldview.  But I decided to take a look at my own hometown and try to analyze how it might contribute.

I was born in Waco, Texas (which refers to itself as the Heart of Texas) in 1973.  Waco occupies space about halfway between Dallas and Austin.  I could get to either one in about 90 minutes by car.  So even though the population measured just a little over 100,000 in the town proper, big city attractions sat in easy reach.  Now, years later, Waco is it’s own attraction thanks to the rise of the Gaines family and Fixer Upper.

The name Waco comes from the Hueco Indians, an arm of the Wichita.   They occupied a village there until white settlers drove them out.  In 1912, a prominent citizen brought back a group of the Hueco to participate in an exhibition of the city’s annual Texas Cotton Palace Exposition and Fair.  (The Cotton Palace Pageant still exists today.)  Event planners fabricated a village of teepees for them to live in, taught them war dances to perform and dressed them in a strange conglomeration of modern and native clothing.  In 2014, over 100 years later, city leaders and historians invited tribal leaders back to work on restoring connections and developing better relationships.

With these racially nefarious underpinnings, I wanted to research Waco’s historical relationship with black Americans.  In 1916, a black teen confessed to murdering a white woman and was tortured, mutilated and burned to death.  In what is now called the “Waco Horror”, 15,000 spectators watched including police and the mayor.  Officials made strides toward repentance 100 years later by finally publicly condemning the lynching.

In spite of these things, people of different colors lived harmoniously all around me.  The north side of town (my neighborhood) was a former air force base.  The military originally established the school I attended for air force families and was, therefore, integrated many years before other schools in the area.  And until 1990, Waco was home to Paul Quinn College, the oldest Historically Black College west of the Mississippi.

Waco is also home to Baylor University – the oldest and largest Baptist school in the United States.  It’s nickname?  Jerusalem on the Brazos.  And churches of different denominations line the streets there.  It’s no surprise that my Christian doctrine leans toward the conservative.

I could explore much more here.  From the serious – this mostly middle class area did not prepare me for the challenges of living in a more affluent area with a more affluent mindset.  To the silly – Dr. Pepper was born there.  I worked at it’s museum and love the sweet beverage still.  It’s all more than you would care to read.  But my introspection begs me to ask if you’ve ever considered your hometown as a character in your story.

Can you think of one characteristic of your hometown that may have shaped who you are or something you believe?  I would love to hear about it in the comments.  Please.  I’m bored here in quarantine.  😉

I don’t know what it’s like to have Fibromyalgia, but I do know what crippling disappointment feels like.  Maybe you do to?  Especially right now?  Click over and read what Jennifer Ross of teawithjennifer.blog has to say in the post Layers of Disappointment.  Her experience + the encouragement of God’s word spoke to my tired, frustrated soul.  Thanks for ministering to me, Jennifer.

And thanks for sharing!  Here’s a button for your blog:

1. Share 1 or 2 of your most recent CHRISTIAN LIVING posts. (No DIY, crafts, recipes, or inappropriate articles.) All links are randomly sorted.

2. Comment on 1 or 2 other links. Grace & Truth linkup encourages community.

3. Every host features one entry from the previous week. To be featured, include this button or link back here on your post (mandatory to be featured, but not to participate). 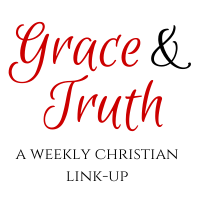 We encourage you to follow our hosts on their blogs or social media.

You are invited to the Inlinkz link party!

Sharing is caring! If you liked this post, do me the huge honor of using the buttons below to share it to your favorite social media accounts. And if you want to get these essays emailed to you once a week, subscribe!  Lastly, my posts may contain affiliate links and I earn from qualifying purchases. If you buy anything from one of these links, I will receive a few pennies to help offset the cost of this website at no additional charge to you. Thank you in advance for your help.